When Friends Gather, the Killing Begins

In post-war Japan, a circle of literary and artistic men and women gathers in the mountain villa of Utagawa Kazuma to spend the summer. Before they've unpacked their trunks, the killing begins.

Ango Sakaguchi published this mystery novel as a series in Nihon Shosetsu and challenged the readers to deduce the murderer and awarded prizes.

Translator's Note: Many reviews by Japanese readers of the original remark on the large number of characters and their confusing relationships. I thought about including a chart of some of the major relationships, but decided against it because it's a part of the reading experience. Read with paper and pencil handy, especially the first chapter.

Buy the paperback at Amazon

The true story begins with the bloody attack on Chief Master of Ceremonies Lord Kira by Lord Asano, the daimyo of Ako, in the shogun's castle and ends with the seppuku, ritual suicides, of forty-seven of Lord Asano's ronin. Eiji Yoshikawa uses facts and fibs in his retelling.

Buy the paperback at Amazon

Buy the paperback at Barnes and Noble

Graves of the 47 Ronin at Sengakuji Temple

Layout of the graves of the 47 ronin

Photo of the graves of the 47 ronin

Three short stories by Yoshikawa Eiji related to the 47 ronin story. The first one takes place before the events in the book and the other two, during.

Dazai Osamu's major works were dark, but he also wrote humorous and uplifting stories. These books are two of his lighthearted tales. Pandora's Box details the experiences of a twenty-year-old youth in a quirky sanatorium in post-war Japan.

Breaking up may be hard to do, but it can be funny. Goodbye was his unfinished last work about a man's machinations to break up with his dozen or so lovers. Before completing this work, he committed suicide with his lover; the two are pictured on the cover.

Get paperback at Amazon

Dazai Osamu (1909-1948) was a major 20th-century Japanese author of fiction. His most popular novels were The Setting Sun and No Longer Human.

The online DAZAI Museum gives a nice overview of his life, family, literary works, and places associated with him and his works.

Click image for free PDF of a few chapters.

Despite the early death of Miyazawa Kenji and only an unfinished manuscript left behind, Night on the Milky Way Railroad has become a children's classic in Japan. A boy, Giovanni, has few friends at school, a sick mother, and a father working far from home. One festival night, he is swept onto a train traveling the Milky Way and into a fantastic world.

Click image for the first chapter The Prince and the Slave Girl.

Taira no Masakado was an ill-fated, reluctant warrior and a bit too naive.

Buy Taira no Masakado at Amazon

Click image for the first chapter Signs of Life.

Uesugi Kenshin, the Dragon of Echigo, fought five battles at Kawanakajima against his rival Takeda Shingen, the Tiger of Kai. This fourth battle, which took place in the 16th century during the Warring States era, is captured by the great historical novelist, Eiji Yoshikawa.

Kuroda Josui, known throughout the novel as Kuroda Kanbei, was a chief strategist and trusted adviser to Toyotomi Hideyoshi, the second major unifier of the Japan of the Warring States (Sengoku) period. This novel imagines seven critical years in the first half of his life before he converted to Christianity (for a short time) and changed his name to Josui, and before Japan found peace.

Here's a translation of the short story The Red Braziers by Eiji Yoshikawa about the Ako ronin, the 47 ronin. 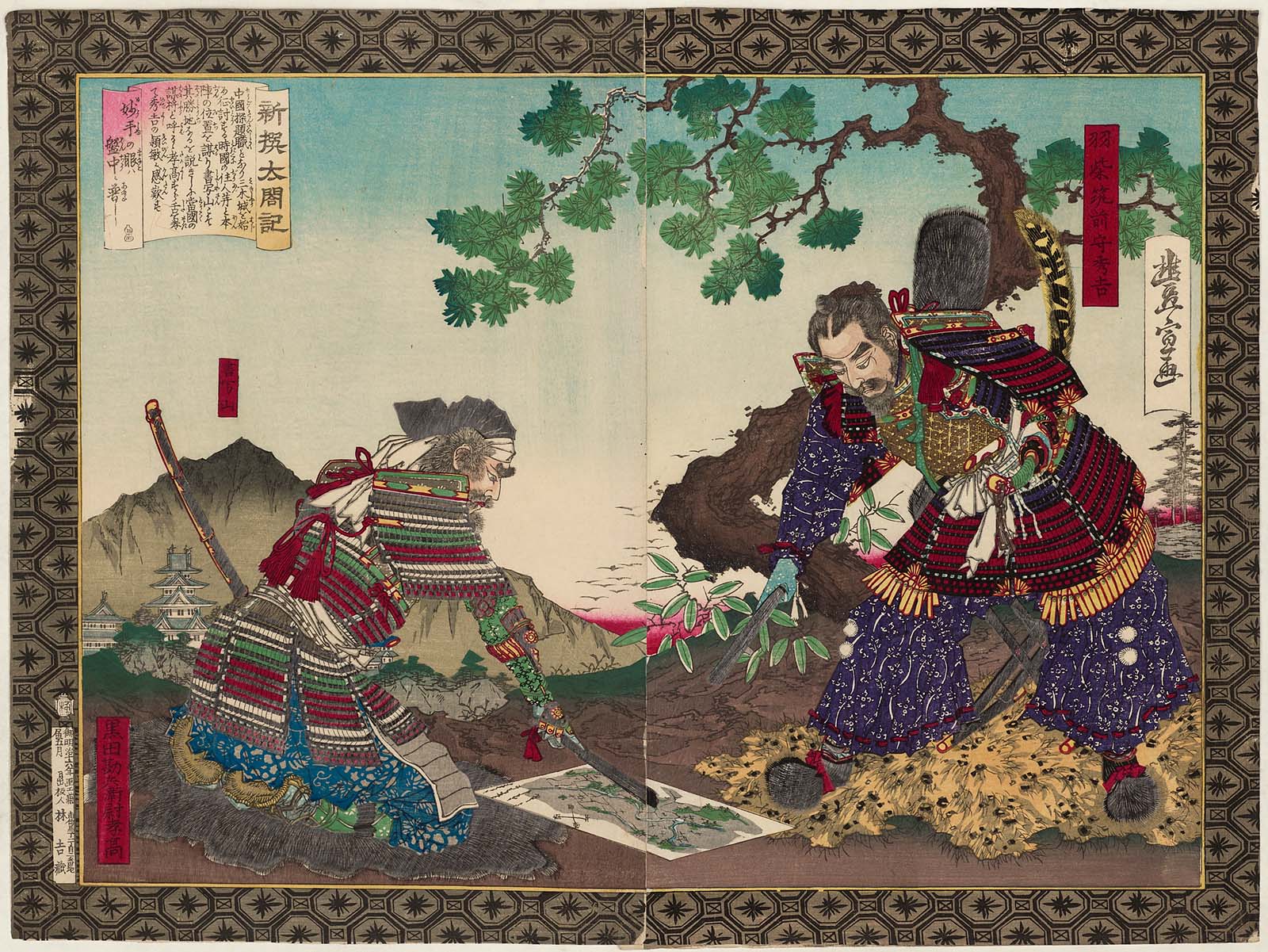 In 1944, Osamu Dazai returned to Tsugaru where he was born and raised to see the people and places that made him and to find the Tsugaru native to model his life on.

Buy Home to Tsugaru at Amazon

For pictures and maps related to this book, look at the photo album Tsugaru by Dazai Osamu. A ton of pictures of his family is found on this Japanese blog (scroll to the bottom and click left << for the next entry). The first page shows his home, parents, and his aunt (mother's younger sister).

Click image for free PDF of a few chapters.

Oshikawa Shunro is credited as one of the fathers of science fiction in Japan. The Undersea Warship series was his popular series of six adventure novels. This novel, written while he was a student, was the first in that series.

These are the first ten stories about the police detective Zenigata Heiji of Edo, now Tokyo. In the first story, Heiji witnesses the kidnapping of Shizu, the young lady who ignites love in him, and must rescue her from a satanic cult. In the last story, he must save the same woman, now his bride, when she is kidnapped on their wedding day. In the other tales, he confronts the challenges of other kidnappings, robberies, and, of course, murders.

Buy The Golden Virgin at Amazon

Meiji Era, Japan -- Toranosuke, the owner of a dojo for swordfighting, is also an amateur detective. He brings murder cases too baffling for the police to The Great Detective, Yuki Shinjuro, a handsome and brilliant man who has traveled to the West. Tora recruits the genius Katsu Kaishu to unravel the mystery in his attempt to outwit Shinjuro. After his investigation, Shinjuro unveils the murderer at the scene of the crime. In the final scene, Kaishu consoles himself for being wrong as usual, and Tora never loses faith in him.

This casebook completes the classic murder mysteries solved by the Gentleman Detective, Yuki Shinjuro, with a bit of assistance from Toranosuke, Hananoya, and Officer Furuta.

A samurai warrior is cursed to live in a time of peace. Saotome Mondonosuke is a samurai plagued by boredom. He is not a ronin, but a direct vassal with wealth, a license to kill, and a frightening but captivating scar.

This book contains all eleven stories in the series 旗本退屈男 (Hatamoto Taikutsu Otoko) by 佐々木味津三 (Sasaki Mitsuzo), serialized in the monthly literary magazine 文芸倶楽部 (Bungei Kurabu) beginning April 1929. These stories formed the basis of the popular Japanese movie series of the same name [The Idle Vassal in English].

Buy The Bored Vassal at Amazon

Is a dog man's best friend? This short story presents one man's struggle with that question.

Learn all 80 kanji learned by first graders in Japan and 100 of the kanji learned by second graders. The stroke order to write each kanji and its Chinese and Japanese pronunciations are presented. You can learn fewer than 200 kanji and nearly 2,000 kanji-compound words containing them!

Click to download a kanji chart of all the kanji Japanese students are supposed to learn in grades 1 to 6.

This book has four stories. Each Japanese sentence comes with a glossary and the English sentence. The full Japanese and English text of the stories is included.

What are the odds? The train isn't going to crash. I'm not going to die. An imagined terror is often far worse than reality. In this story, a man must face his terror of a simple train ride.

A pet dog once had a wonderful home on the scenic Lake Nojiri in Japan. His best friend and master left one day, but his unconditional love for his master never died.

Before Astro Boy, the hero of the children of Japan was Hinomaru Hatanosuke, a samurai teenager, created by Nakajima Kikuo, a teacher and a manga artist. This series ran as a serial from January 1935 to September 1941 in the boys' magazine Shonen Club (少年倶楽部).

Here is the original manga 日の丸旗之助.

The result of an evening spent with iMovie

Goodreads reviews for A Fantastic Tale of Island Adventure

Whitey, a happy dog, witnessed misfortune and it changed his life. He was driven from his home. Will he ever go home again?

Akutagawa Ryunosuke as a boy

Masaoka Shiki was a celebrated haiku poet and an avid baseball fan. This series of newspaper articles helped to introduce the game of baseball to the Japanese people.

Take your vitamins! Suzuki Umetaro discovered an important one, Vitamin B. He is one of the venerated Three Taros of RIKEN.

So Many Books, So Little Time

Here are some authors and scenes from books I may translate... someday.

Natsume Soseki Before the Mustache

All photos are from 漱石全集 The Complete Works of Soseki.

国立国会図書館内限定 - National Diet Library Digital Collection
青空文庫 - Aozora Bunko - copyright-free literature
読書 - Book Meter - A Japanese site for finding books in Japanese, has rankings and reader reviews (like Goodreads, but better organized)
japanese literature in english - a database of all Japanese literary works translated into English
MOJIZO - Drag and drop a picture of one cursive kanji character (崩し字、草書) to get a list (with pictures) of possibilities.
The Japan Foundation - Japanese Literature in Translation Search
The Samurai Archives - tons of samurai info
Ghibli Museum - the only thing on my bucket list

Today I will learn Japanese!!

Yeti says, "Thanks for visiting jpopbooks.com."

Mail comments to Yeti or Shelley